Where do authors get their ideas? Does a great master author hand them an idea on a silver platter? Is there a crystal ball they can consult? Do ideas come in a dream after eating too many hot chilies before bed?

Ideas come to authors because they have brains that work differently from everybody else. There’s no magic and nothing special has to happen. They can be inspiration by pretty much anything. The rest of the world can see the same thing and go “Yea, so what?” But to an author, something latches on as a possible novel idea and won’t let go.

It haunts and teases, “Here I am. A brilliant idea. What are you going to do with me?”

The author responds, “I don’t know. What have you in mine?”

Idea just laughs. It knows, but won’t tell. It lingers in the secret parts of the brain waiting to pounce at the most unexpected moments.

One such moment happened to fantasy author Neil Gaiman and Stardust.

One day while Nail was driving in the countryside he saw a stonewall with a hole in it. He thought of a faerie hiding behind the wall. The idea lingered, but never solidified. Until one night, when he saw a falling star.

How many falling stars have you seen, thought, “How cool,” and moved on.

But this particular falling star didn’t just streak across the sky, it streaked across Neil Gamin’s imagination and the plot for Stardust leaped into his head. It was first a comic book, then novel and finally a major motion picture.

For me, the idea that inspired my science fiction novel, Pegasus Colony, was Minnesota weather.

And you say, “Yea, I live through bad weathers every year. So what? It never inspired me to write a novel.”

The difference for me is, I have the mind of an author, but more importantly, I’m originally from southern Louisiana. Weathers there are quite a bit different. Therefore winters in Minnesota were new to me.

I lived 68 miles due north from the Gulf of Mexico. In wintertime, it rains and rains. In February, it snows once every ten years. Summer begins in the middle of June and continues until the middle of October. It’s hot and humid well in to the high 90s pretty much every day.

I didn’t learn to sweat until I moved to Minnesota where it’s cold, cool and comfortable most of the time, but for the few days it does get into the 90s and its humid, I sweat with the best of them.

In my mind, my first winter in Minnesota, was 30 below zero with wind chill of 60 below for a full

month. I’m sure it was only for two weeks, but that first winter was most impressive.

It was during the winter carnival. I thought, “Those poor people. They’ll have to cancel the parade.”

So I put on my long johns, pulled on my wool socks, zipped up my one-piece winter suit, pulled my hood over my winter hat, put my heavy boots and thick gloves on, and we set out.

I’ve acclimatized since then. I no longer have that winter suit or heavy boots and thick gloves. I’ve learned to play outdoors in the winter. I’ve gone cross-country skiing, snow shoeing, and have even canoed down the Mississippi River on New Year’s Day.

I remember one winter where after two weeks the high was 5 below zero. Just after that stretch of cold weather, I was at work and had been outside. I was on my way upstairs and as I passed the lounge area someone asked me, “What’s it like out there?” 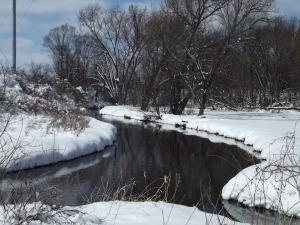 I kept walking, but in my mind, I came to a complete halt. I remember thinking, “What did I just say?” I’m from southern Louisiana. We invented humanity and shipped it out the rest of the country and I think 26° is nice? Boy have I changed.

My next thought was, “What if there was world that was so cold that 26° was like summertime?”

And that was the beginning of Pegasus Colony.

The planet Akiane a world so cold that expect for a small stretch of water along the equator, around the world the oceans’ surface water freezes. There’s only one colony on this planet and they live in a habitat. Winter lasts for six years.

Come and visit Pegasus Colony on the planet Akiane in the Pegasus Constillation and see what winter is like in the mind of an author. Me.