Small things is what fairy gardens are made of.

(I apologize for the grainy photo. There is a window nearby, but it was a cloudy day. Only had indoor lighting.) 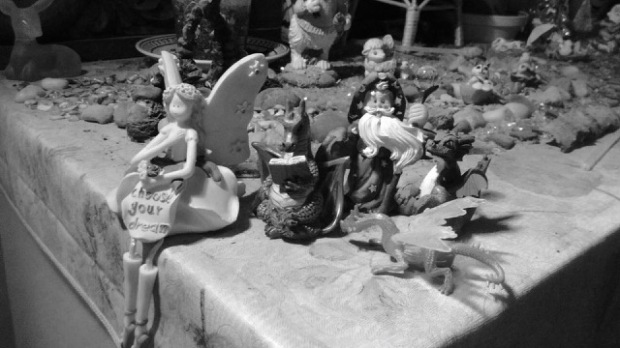 The wizard belongs to Kairos, the dragon reading a book to her friends. She likes to read fantasy stories about mythical humans and the troubles they cause from misusing magic. She has no idea of the trouble she and her wizard will soon cause.

He is the oldest living wizard of the land. His head is so full of spells, he’s starting to forget what he knows.

In an effort to preserve his spells, Kairos employed gnomes to create something to help her wizard.

The gnomes had a committee meeting to discuss the project where they all talked at once and no one listened to the other.

At the end of the meeting, they had a plan. Actually, they each had a plan that didn’t necessary work well with the other plans.

As each finished their piece, they give it to the assemblers, who use magic to make the pieces fit, which influenced the final outcome of the project, which they named the little black box.

Spells are lacking key ingredients. A wizard cast a spell to heal a farmer’s broken arm and suddenly the farmer had four arms.

Because a new wizard didn’t learn the spell from a mentor, he or she mispronounced a word or doesn’t say the spell with the proper inflection and a gentle storm became a flash flood.

Instead of saving a crop from a dry spell, the village became an island in the middle of a lake.

Instead of blessing a wheat field so the farmer would have an abundant crop, the wheat field turned into wild flowers.

Wizards begin to doubt their magical abilities. Mortals stop asking for their help, which marked the end of magic.

Kailos buried the little black box in the ground where it was forgotten.

Centuries later a geological team found it, opened it up, turned it on, and became captivated by what they found.

The little black box was renamed laptop. The world has never been the same.